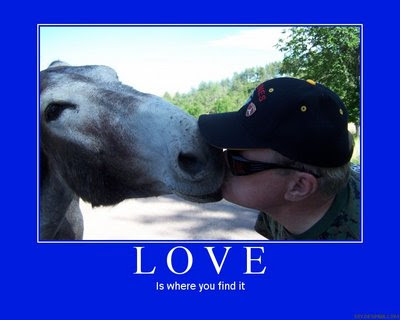 Following the spate of high-profile Republicans admitting to affairs, the former Republican Whip of the Massachusetts Senate, Robert A. Hall, has come forward to deny he had an affair recently while on vacation in South Dakota. “Liberal bloggers have alleged I was in Custer State Part for an assignation, but it’s not true,” Hall said. “It was just an innocent kiss.” Hall reported that his wife, Bonnie, was standing loyally beside him. “In fact, she took the photo,” the former five-term legislator declared. Conservative groups demanded to know the gender of the burro, who did not return phone calls from the media.

Posted by TartanMarine at 5:20 PM