The Last White Rose: The Secret Wars of the Tudors by Desmond Seward

Though a history buff, this book about the reigns of Henry VII and Henry VIII was an eye-opener for me. I had assumed that after Henry Tudor had defeated and killed Richard II at Bosworth Field (through treachery), he went mostly unchallenged (excerpt for Perkin Warbeck’s rebellion which was more serious than I thought). In fact there were endless plots against both Henries, some which only failed due to chance. There were also ginned up phony plots, mostly to strengthen the position of advisors to the paranoid Henry VII an VIII. Still people were killed on the scaffold in gruesome ways. We think politics is rough today. In those days, losers lost their heads! I recommend this book about a little-known period of history. I look forward to reading the author’s account of the Wars of The Roses, since two of my ancestors were killed at Blore Heath fighting for Lancaster.

Posted by TartanMarine at 5:23 PM No comments:

See the picture? The swing in on the porch off our bedroom (but it faces front).

The package on the swing is our latest Amazon delivery.

The white sign above the package says, "Please leave packages at the front door."

If the dogs had not barked, might not have got it. Not the first time. 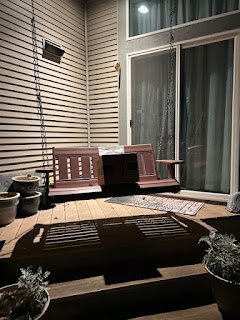 50 years ago today I was elected to the Massachusetts Senate

Carried all 13 cities and towns

Largest vote for a senator ever in the district

Posted by TartanMarine at 9:10 AM No comments:

Tuesday is the election. In my opinion, the country is well down the slope to tyranny. We can at least slow that descent by voting straight Republican. Get everyone you know out to vote Tuesday, November 8, 2022.

Posted by TartanMarine at 11:55 AM No comments:

Perfect for Christmas - Books by Bob

Perfect for Christmas - Books by Bob

58 years ago today I graduated from MCRD Parris Island and became a Marine. I have tried to bear that title with honor. ~Bob

Posted by TartanMarine at 9:45 AM No comments: 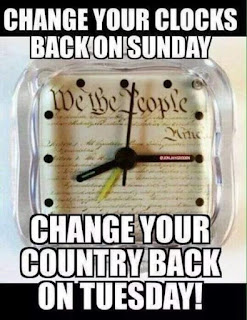 Posted by TartanMarine at 5:35 PM No comments:

The same people who called me a baby killer when I came home from Vietnam, are now campaigning for the right to kill babies. 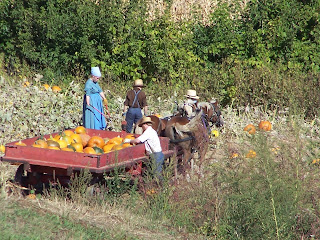 Posted by TartanMarine at 1:46 PM No comments:

Health Update: Basically holding my own. I pulled my arthritic left hip in  my Monday chess class, but in a week it had returned to normal. Not good, but normal.

Our neighbor, Bonnie, and I voted 10/25, as soon as early voting was open. We figure the good guys are ahead by three!

Marine boot camp is designed to peel off the thin layer of civilization your parents grafted on you, while instilling discipline.

I hope my obit says, “He fought all the way.”

The oil drawn from the National Strategic Petroleum reserve has lowered prices a bit. It will have to be replaced. Stand by for much higher gas price post 11/8. We paid for it to go in, we buy it now at higher prices, and we will pay to refill it.

Scary thought.: These are the good old days your grandkids will look back on.

My dad said if I wanted to go to college, I had to find a war like he did. Next thing I knew I was in Vietnam.

We were at the dog park with Buddha, our granddaughter’s dog. An Old English Bull Doggie named Tank came up behind me, lifted his leg, and… Guess  he liked me.

We have a friend, Tom. Working class guy who drives heavy equipment. He told us he worked for Tim Michels, candidate for Governor of Wisconsin. Said Michels is a really nice guy; the workers like him.

My emails and text messages inform me every day that unless I chip in $10 or more to somebody RIGHT NOW, civilization is lost. Living on social security and a much-depleted IRA, sorry about civilization.

The FBI has become a wholly-owned subsidiary of the DNC.

The Marine is the weapon. A rifle, handgun, knife, howitzer, tank, chopper, or jet, is just a tool.

Remember when Obama nominated Merrick Garland to the Supreme Court and Democrats said he was a moderate? Some moderate.

If you look up “Boondoggle” in the dictionary, you’ll see a picture of California’s High Speed Rail project.

What’s the difference between Iran and the USA? Iran kills protesters. In the USA, the FBI just arrests them. So far.

“Don’t think money does everything, or you are going to end up doing everything for money.” ~ Voltaire

If you have principles, you will have enemies.

I want to open a pub in a seafront town and call it the “Surly Sailor.”

Liberals could shut up conservatives by having a live pregnant man examined on TV by independent doctors.

Every male athlete gets two shots to be a winner. If he flops in men’s sports, he can transition to female, and try women’s sports.

From the Internet: 7 Core Principles of Conservatism

People who believe men can get pregnant are the science deniers.

If you believe the holocaust couldn’t happen here, you need to read up on Sand Creek.

I didn’t like physics in high school, and physics has held a grudge. Inanimate objects often refuse to cooperate. More so as I get older.

“Better to die on one’s feet than to live on one’s knees.” ~ Jean-Paul Sartre

These climate-activists attacking multi-million-dollar paintings? If you shoot a couple of them, it will stop. I promise.

Few things scare me as much as a website that I use announcing it is making major changes.

"Our country is in danger, but not to be despaired of. Our enemies are numerous and powerful; but we have many friends, determining to be free, and heaven and earth will aid the resolution. On you depend the fortunes of America. You are to decide the important question, on which rest the happiness and liberty of millions yet unborn. Act worthy of yourselves." ~ Joseph Warren (1775)

Being trans is gender appropriation.

I notice that people who say on voice mail they will call right back, usually don’t.

“We must all suffer from one of two pains: the pain of discipline or the pain of regret.” ~ Jim Rohn

I went to buy blueberries for my cereal. Half the packages were marked, “The berry that cares.” I think the marketing department has jumped the shark.

“You can never get enough of what you don’t need.” -~ David Morgan

Note from a dental technician who bought two of my quote books: “My dad and whole family will greatly enjoy these as they resonate with everything we value & hold dear. What a gift you have & what a sacrifice of time.” ~ Emily

Email from a guy in NC: “I  bought four copies of your Quotes. I gave three to friends and one is on my desk.  GREAT WORK !” – Kirk. He followed up that he bought a two more books for other friends! He also wrote a very positive review on Amazon.

Quotes for the Conservative Heart: Ideas as Weapons of Defense

Quotes for the Conservative Heart is a collection of over 1,900 quotes, thoughts, and adages that will make you think (which may be an uncomfortable experience), which will help you defend yourself against ad hominin attacks, and which will help your writing and speaking. They will inspire you to fight a bit harder and a bit longer. As necessary to your security as an extra magazine, this book will help you identify threats to you, your family, and your culture. Open carry (of this book) is encouraged. We hope it will be a constant companion and a treasured possession. If you like it, please review on Amazon and tell your friends.

His blog of political news and conservative comment is www.tartanmarine.blogspot.com. He currently volunteers as a writer-editor in the My Life, My Story program as the Madison VA hospital, interviewing vets and writing up their life histories. He is also teaching chess to kids after school.

Posted by TartanMarine at 8:44 AM No comments:

Posted by TartanMarine at 8:20 AM No comments: