Biden’s 18th-century solution to a 21st-century energy problem
https://www.manhattan-institute.org/offshore-headwinds
Posted by TartanMarine at 11:08 AM No comments:

Lincoln did it better by Diana Schaub

Our shelter in the storms by Allen C. Guelzo

Posted by TartanMarine at 10:37 AM No comments:

‘Defund the Police’ Movement Triggered Massive Spike in Murder of Black Americans. So Much for Equity. 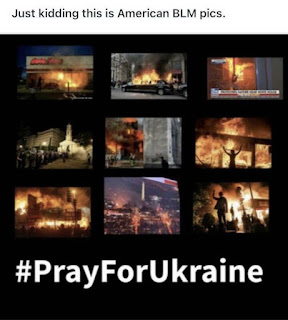 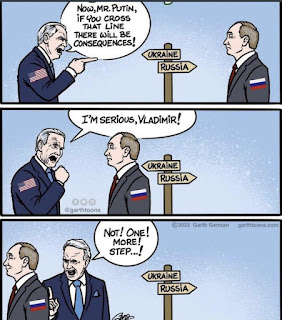 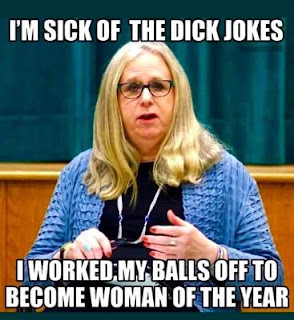 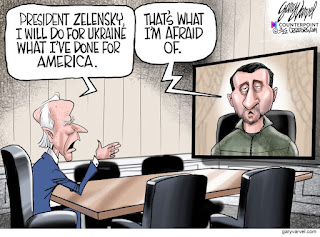 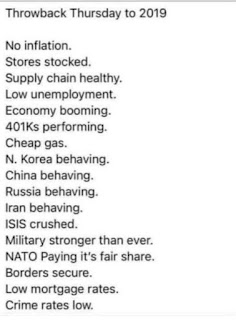 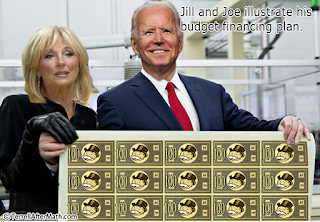 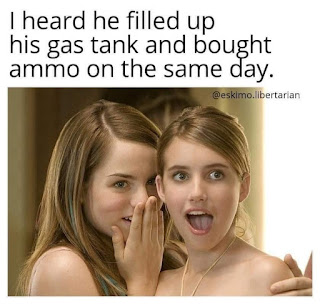 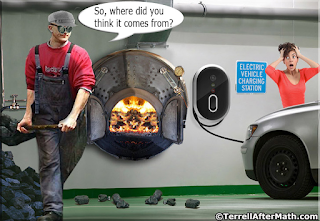 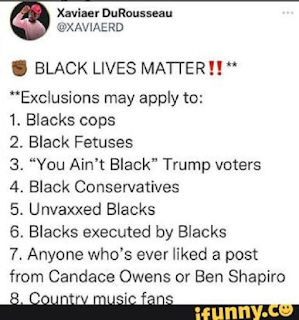 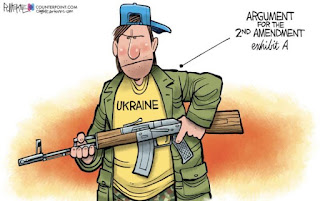 Posted by TartanMarine at 2:37 PM No comments:

Posted by TartanMarine at 10:03 AM No comments:

J.K. Rowling compares demand to accept transgender wokeness to the drive for conformity in the Soviet Union

The Continuing Importance of Thomas Sowellhttps://imprimis.hillsdale.edu/Good article. Imprimis subscriptions are free.
Posted by TartanMarine at 12:39 PM No comments:

https://kevinwhiteman.com/2022/04/16/perverted-team-biden-floats-plan-to-pulling-medical-resources-from-va-to-serve-illegal-aliens/
Not verified
Posted by TartanMarine at 5:11 PM No comments:

"Eyes Wide Shut," by Ruy Teixeira
https://www.nationalreview.com/magazine/2022/04/18/eyes-wide-shut/
Must read if you can get past the paywall.
Saving the Ayatollahs by Reuel Marc Gerecht & Ray Takeyh
https://www.fdd.org/analysis/2022/03/31/saving-the-ayatollahs/
Good article, no paywall
The End of Illusions by Jay Nordlinger
https://www.nationalreview.com/2022/04/the-end-of-illusions/
The Adventures of Hunter Biden by Andrew McCarthy
https://www.foxnews.com/opinion/questions-media-hunter-biden-dad-andrew-mccarthy
Posted by TartanMarine at 2:38 PM No comments:

We have become the Tower of Babel

It is the most comprehensive and amazingly balanced essay on our society's changes and problems that I have ever seen. Detailed discussion and totally nonpartisan, with great insights in where we are and how we got here. And how dangerous things have become, and how we need to change things if we are to keep the society from falling into real and devastating chaos. It's not a short read, but every second spent on it is worthwhile. Del https://www.theatlantic.com/magazine/archive/2022/05/social-media-democracy-trust-babel/629369/
Posted by TartanMarine at 11:13 AM No comments:

1. According to the National Center for Educational Statistics (NCES), 21 percent of adults in the United States (about 43 million) fall into the illiterate/functionally illiterate category. Apr 29, 2020

2. The average American is considered to have a readability level equivalent to a 7th/8th grader (12 to 14 years old). This level is actively used as a benchmark for written guidelines in the medical industry. Mar 22, 2017

3. The share of Americans who report not reading any books in the past 12 months has fluctuated over the years the (Pew Research) Center has studied it. The 23% of adults who currently say they have not read any books (not even a junk novel) in the past year is identical to the share who said this in 2014. (This is scary. I read 4-5 books a month. And we wonder at the political mess we are in. ~Bob)

Posted by TartanMarine at 12:17 PM No comments:

New York state: Muslim pulled over for speeding, is discovered to have 58 illegal guns
https://robertspencer.org/2022/04/new-york-state-muslim-pulled-over-for-speeding-is-discovered-to-have-58-illegal-gun
Posted by TartanMarine at 9:49 AM No comments:

This is part of a planned trilogy; I have already ordered book two. Holland is a novelist, so holds your attention, even tough the book goes into great detail about the first three years of WWII.  He focus not only on the leaders on both sides, and the battles, but the men in the lower ranks.

His account is balanced as good history should be. He is not afraid to point out mistakes and errors by both sides. Though I have an Med in history and am well versed in War Two, I learned a great deal. I highly recommend it.

Posted by TartanMarine at 3:25 PM No comments:

Guests of the Great Emancipator

Posted by TartanMarine at 3:14 PM No comments:

Posted by TartanMarine at 10:27 AM No comments:

(I don't know why the blog double spaces these posts?)

Health Update: The small carcinoma tumor they took off my face is healing well.

Renal detected a "microscopic" trace of blood in my urine, may be a small tumor in my bladder. If so, easy to fix if you don't mind a camera being jammed up your hoo-hoo! Had a urine test retake to see if there is still blood in my pee, waiting results.

There are still two spots in my lung. They are a fungal infection, Penicillium. Thankfully not aspergillus (why they took my left lung out). Not considered very dangerous. The bronc was cancelled. They say they will treat it aggressively and will schedule another CT scan.. We shall see.

Starting to have pain in my left hip, so another hip replacement may be in my future.

Will keep you posted.

Turning 76 on April 15, past my sell-by date and the biblical three score and ten. I continue to march.

Are you a hero on “Call of Duty”? The Ukraine is calling.

I tell the VA nurses that I might not look like much now, but back in the day I was almost average.

People who fear for their children are not amenable to calm discussion.

More people have died of COVID under Biden than under Trump. So much for his promise that he had a plan to end COVID.

Only a fool judges the past by the standards of today.

They want to reduce carbon, and you, my friend, are a carbon-based life form.

Being smart isn’t enough. You have to be smart fast enough.

From the Net: “The government says they can stop global warming. But they can’t stop robocalls.” (I get 8-12 a day.)

March 7: Gas is $4 a gal in Wisconsin. Time to open the Arctic National Wildlife Refuge to drilling. Time to open fracking on public lands. And is it too late for Keystone?

“Tolerance will reach such a level that intelligent people will be banned from thinking so as not to offend the imbeciles.” – Dostoevsky, Russian novelist

You cannot do everything needed to fix the world. But you must do something.

I haven’t seen liberals rally to defend their position, in this case Biden on fuel prices and Ukraine, since…well…since the Rittenhouse verdict. –George S.

Don’t mess with me. I used to be a bouncer in a daycare.

When politicians send me an email marked, “Confidential, do not share” I know it went to a mass audience and it’s a request for money.

You want to replace something? Trust me, they don’t make that kind anymore.

The first principle of leadership: Set the Example.

Malinvestment is a term mostly associated with the “Austrian” school of economics, which nobody knows about in Austria, the key figures of the Austrian school having emigrated to the United States and England as they fled Nazism in the 1930s and 1940s. Malinvestment is what happens when some public policy or other source of economic distortion makes certain otherwise unprofitable investments look profitable or makes them temporarily profitable until the underlying economic reality asserts itself. The (very simplified) Austrian explanation of recessions is that when politicians goose the economy through loose monetary policy, that lowers the cost of capital and makes certain investments more profitable than they otherwise would be, resulting in a misallocation of capital that lasts until the artificial stimulus ends.  –Kevin Williamson.

“The main thing I always said was you have to do the best possible work and you don’t have to worry about looking for work; your reputation follows you. … People are where they put themselves in life. No one is entitled to anything. You have to show something, goodwill or work, to get something.” –91-year-old Marine veteran I interviewed.

"The idea of conquest was central to the Sultanate, intricately interwoven with its holder's position as leader of the Muslim world. ... Only spectacular conquests could legitimize a sultan." Roger Crowley, Empires of the Sea.

"What our generation has forgotten is that the system of private property is the most important guaranty of freedom, not only for those who own property, but scarcely less for those who do not. It is only because the control of the means of production is divided among many people acting independently that nobody has complete power over us, that we as individuals can decide what to do with ourselves. If all the means of production were vested in a single hand, whether it be nominally that of 'society' as a whole or that of a dictator, whoever exercises this control has complete power over us."
-- Friedrich A. Hayek, The Road to Serfdom [1944]

Don’t buy products from Robo-callers or spam emails. It only encourages them.

Many people claim to want peace-of-mind. But when they get it, become bored and seek out drama and chaos.

“He meant well,” is one of the worst tings you can say about a person.

To be able to think long term is a gift.

The secret of weight loss is discipline.

Get the collection! My “Random Thoughts” from 2009 through July, 2013 are collected in this book: The Old Jarhead's Journal: Random Thoughts on Life, Liberty, and Leadership by Robert A. Hall

The Old Jarhead’s Journal is a collection of Random Thoughts on politics and life and Conservative Political Essays, mostly published on the author’s blog, including the essay “I’m Tired” which went viral on the Internet in 2009, “The Hall Platform,” “This I Believe,” and “Why I’m a Republican.” While they will be of interest to conservative thinkers, they are collected here in book form as a service to readers who wish to give a copy to favorite liberals and watch their heads explode. All royalties are donated to the Injured Marine Semper Fi Fund.

Robert A. Hall is a Marine Vietnam Veteran who served five terms in the Massachusetts State Senate. He is the author of The Coming Collapse of the American Republic. http://www.amazon.com/Coming-Collapse-American-Republic-prevent/dp/1461122538/ref=sr_1_5?s=booksandie=UTF8andqid=1304815980andsr=1-5 For a free PDF of Collapse, e-mail him at tartanmarine(at)gmail.com. Hall’s twelve books are listed here: http://tartanmarine.blogspot.com/2010/07/new-book-published.html. His blog of political news and conservative comment is www.tartanmarine.blogspot.com. He currently volunteers as a writer-editor in the My Life, My Story program as the Madison VA hospital, interviewing vets and writing up their life histories.

Posted by TartanMarine at 10:59 AM No comments: