9/11 for ? French president calls attacks ‘act of war’ by Islamic State
https://www.washingtonpost.com/world/string-of-paris-terrorist-attacks-leaves-over-120-dead/2015/11/14/066df55c-8a73-11e5-bd91-d385b244482f_story.html?wpmm=1&wpisrc=nl_headlines
Excerpt: In , meanwhile, one of the attackers was identified as a French national who was known to authorities, according to two French officials familiar with the case.
And in , authorities said a Syrian passport found at a attack site was carried by a man who passed through an Aegean island last month. Left behind in were the latest scars, said Pope Francis, from the “piecemeal Third World War.” More than 350 people were wounded — including at least three Americans — with about 100 suffering serious injuries, and French officials said. The prosecutor’s office set the latest death toll at 129. (‘We are going to lead a war which will be pitiless’ --Hollande. This will be the "9-11" for , a coordinated series of attacks to massacre as many people as possible.  Hopefully none of the attackers will survive, although so far it seems one may have been captured. This is an horrendous tragedy, an atrocity of the worst kind, and now we will see how the French leadership responds.  We may see a very strong response, with a focus on finding jihadist maniacs that will explode all over the nation.  Sympathy for Muslims will decline markedly, willingness to accept refugees will also.  Politicians may start falling all over each other in promising to take whatever steps are needed to make safe.  The next couple of weeks will be hectic there, for sure. -- On Friday 13 October 1307 the Knights Templar were assassinated. Coincidence? I think not. Mostly I think not. --Kevin Greve. Remember how well our 9/11 is remembered by too many Americans. And cue the "We are most worried about a backlash against Muslims" idiots. ~Bob)

And on cue: Guardian: After jihad, “far-right groups may well fuel more hatred.” By Robert Spencer, jihadWatch.org
http://www.jihadwatch.org/2015/11/guardian-after-paris-jihad-far-right-groups-may-well-fuel-more-hatred
Excerpt: The Guardian doesn’t worry about the Islamic State presence in . It isn’t concerned about how many Islamic State sympathizers are living in now. It couldn’t care less how many more jihadis will enter via the refugee crisis. No, the Guardian is only concerned about the sole matter that worries the Western intelligentsia: will “far-right groups” exploit this jihad massacre to “fuel more hatred”? I.e., will those who believe in free societies start calling attention to the jihad threat again?

Salon: jihad massacre shows that “right-wing” needs to “moderate their rhetoric”
http://www.jihadwatch.org/2015/11/salon-paris-jihad-massacre-shows-that-right-wing-needs-to-moderate-their-rhetoric
Like blaming Churchill for German's rise in the 1930s. ~Bob

Really? OBAMA: IS NOT GETTING ‘STRONGER,’ WE HAVE ‘CONTAINED’ THEM
http://www.breitbart.com/video/2015/11/13/obama-isis-is-not-getting-stronger-we-have-contained-them/?utm_source=facebook&utm_medium=social
Obama the morning of the French terror attack. If Muslim Jihadists screaming "Allah Akbar" took over the White House and a Muslim Imam in religious robes quoted the Qur'an while beheading Michelle and the Obama girls, when rescued Obama would say it had nothing to do with Islam and we needed to take in more Muslim (but not Christian) refugees. ~Bob France is learning the joys of multiculturalism and the strength that comes from diversity. How many "Syrians" are we letting in? --Chuck)

Obama statement on : ‘I DON’T WANT TO SPECULATE ON WHO DID THIS’
http://therightscoop.com/obama-statement-on-paris-i-dont-want-to-speculate-on-who-did-this/
Excerpt: Obama of course, came out and said that he can’t speculate on who attacked tonight, because it could be Global Warming, or the Amish, after all. (Obviously that just means we need more restrictive gun laws here, like has. --Tom K.)

It's coming here--nothing surer. I published this blog post in 2009, six years ago:
The Next Terrorist attack on
http://tartanmarine.blogspot.com/2009/09/essay-next-terrorist-attack-on-america.html
Includes my 1998 column predicting 9/11. ~Bob

Le Kobayashi Maru:  came to the 10th arrondissement today. It will come to other Western cities soon.
http://pjmedia.com/richardfernandez/2015/11/13/le-kobayashi-maru/
Excerpt: If there was any doubt that the world is now in crisis, the mass casualty attack on  a few hours ago should lay the question to rest.  In response to the assault,   closed its borders, declared a state of emergency and declared a curfew, a trifecta of measures unseen since World War 2. ... As recent events at American campuses have shown, when faced with the choice of saving the Left and saving the actual world, the odds are that “the world” goes over the side first.

First American killed in identified as college student
http://www.foxnews.com/world/2015/11/14/first-american-killed-in-paris-identified-as-california-college-student/ http://www.foxnews.com/world/2015/11/14/france-anti-terror-police-search-for-potential-accomplices-in-paris-attacks/?intcmp=hpbt1
Excerpt: Nohemi Gonzalez, 23, a student at California State University Long Beach, was identified as the first citizen killed in Friday night’s terror attack in that claimed the lives of 129. authorities have also said they arrested three in raids in after tracing a car’s license plate that was seen near the concert hall that was attacked.

jihad murderer: “I am from .” By Robert Spencer, JihadWatch.org
http://www.jihadwatch.org/2015/11/paris-jihad-murderer-i-am-from-isis
Excerpt: Last February, the Islamic State (ISIS) declared that they would soon flood with refugees. That means that there will be many more jihad attacks like those we are seeing in . 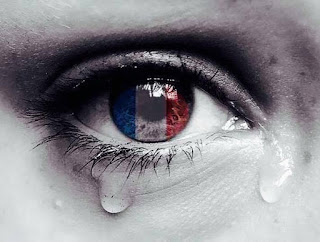 After the of Hattin in 1187, Saladin had the captured knights beheaded.
http://thearmedhistorian.com/2011/07/26/the-battle-of-hattin-how-the-christians-lost-the-holy-lands/
https://en.wikipedia.org/wiki/Battle_of_Hattin
However all of the 200 knights of the Templar and Hospitaller Military Orders taken prisoner were executed at Saladin's orders,...

Muslims often slaughtered Christians
The Muslim Mamluks from under Baibars attacked several Christian-held cities.  In 1265 The citadel of Arsef was defended by the Knights Hospitallers. The Knights surrendered when the Muslims pledged they would g free. He enslaved them all, breaking his word. In 1266, he besieged the Templar castle at Safed. He offered them surrender term that would let them withdraw unharmed. when they marched out, he seized them and had them beheaded. When he couldn't taker 1n 1267, he hunted Christians in the countryside and surrounded the town with their bodies. He then attacked . They refused surrender terms knowing about Arsef and Safed. The second attack burst the into the town and what followed was "the single greatest massacre of the entire crusading era." It shocked even the Muslim chroniclers. But it is barely mentioned in most western histories of the crusades. Source: God's Battalions by Rodney Stark, pp232-233. ~Bob

Exclusive: As  Burned,  Islamists Told Muslims To 'Struggle" For Islamic State In Unprecedented Islamic Show Of Force
http://www.breitbart.com/london/2015/11/14/exclusive-as-paris-burned-uk-islamists-told-muslims-to-struggle-for-islamic-state-in-unprecedented-islamic-show-of-force/
BEDFORD, United Kingdom – As the distressing attacks in Paris were occurring last night, some of Britain’s most high profile and notorious Islamist extremists gathered just north of London, unimpeded, to tell hundreds of British Muslims to “struggle” for an “Islamic State.” ...At the “Quiz a Muslim” event held last night in the Corn Exchange in Bedford, panelists called British values were “junk”, demanded that Muslims should “define” British law, and ominously, appeared to suggest Muslims were at war with the British. The event was organised and chaired by Bedford-born blogger Dilly Hussain; an avid Islamist and a supporter of a global Islamic caliphate.

Islamic State to : “We will make your wives concubines and make your children our slaves
http://www.jihadwatch.org/2015/11/islamic-state-to-russia-we-will-make-your-wives-concubines-and-make-your-children-our-slaves

French Jewish Council Calls for 'World War' Against "Jihadist Fanatacism'
http://www.breitbart.com/national-security/2015/11/14/french-jewish-council-calls-world-war-jihadist-fanaticism/
Excerpt: “Our country is bloodied by all those innocent lives cut short by the bullets of these new barbarians. The world war against the monstrosity of jihadist fanaticism must become the top priority of democratic nations,” it said. “We must combat them tirelessly and without pity, until they are defeated,” the group added. (Naw!  POTUS in denial and won't say the term.  However, parts of EU labeling "Made In Israel" products..... WWIII is ongoing and with 10,000 Syrian males unloaded in  this week (Did you hear THIS on the news or just controversy over GOP candidates' comments and red cups, so vital....), here in US soon, very soon.  The Trojan horse has docked and unloaded.  Are you in or near the 180 cities groping for fed money for these "refugees"?  Many in AZ, CA, FL (including the capital), OH, PA, NC, TX, WI (including the capital).  See this link:  http://conservativetribune.com/obama-sending-refugees/ --Barb)

First load of 10,000 Syrian refugees has arrived in , being resettled into 180 unsuspecting communities
http://powderedwigsociety.com/first-syrian-refugees-arrive-in-new-orleans/
Picture shows all young Muslim males. No old men, women or kids...~Bob

It’s Time to Give Jihadists the Apocalypse They Long For — and Other Thoughts About the Nightmare in
http://www.nationalreview.com/corner/427062/its-time-give-jihadists-apocalypse-they-long-and-other-thoughts-about-nightmare-paris

ISIS Genocide Victims Do Not Include Christians, the State Department Is Poised to Rule
http://www.nationalreview.com/article/427044/christians-isis-genocide-obama-administration


Excerpt: A 153-foot statue of an open-armed Jesus famously towers high above the Indonesian city of , but Christians are under siege in the world's fourth-most populous country, according to a disturbing new report. The Southeast Asian nation, where about 90 percent of its 250 million people are Muslim, has long been seen as seen as an example that a large Muslim majority can live in relative peace alongside minority religions, like Christianity and Hinduism. But in October, there was a troubling outburst in violence in the Sharia-law governed region of Aceh.
Posted by TartanMarine at 2:34 PM