I'm watching the debate, painful as it is. During the long segment on the economy, woeful economic ignorance was on display by both candidates. They may know (or not) that their positions are ignorant, but they know the vast majority of people are ignorant of basic economics, so they are free to con votes with pie-in-the-sky because people, being ignorant, will vote for things that will hurt them badly in the long run.

Both are against Free Trade, because that is popular. Just as it was popular for to sign the Smoot-Hawley Tariff Bill, which killed international trade and turned a bad recession into the Great Depression. See:

Tariff disaster offers a lesson on the folly of protectionism. By Thomas Sowell
http://articles.baltimoresun.com/2005-06-16/news/0506160077_1_tariffs-smoot-hawley

As to NAFTA, see:

And while the deficit of $19T or $20T  is bad, worse is the unfunded liability, which may run from $87T to $240T. But neither one dares to talk about that, because dealing with it will be very politically painful. See my short piece:

It doesn't matter who you vote for in November. By Robert A. Hall
http://tartanmarine.blogspot.com/2016/05/it-doesnt-matter-who-you-vote-for-in.html

Fixing this will be so painful no politician dares move on it at all. But letting is ride is going to be far more painful. I believe we face a fiscal and economic collapse followed rapidly by a political and social collapse. Since I published this book a few years ago, every thing has gotten worse, plus there are factors, all negative, I didn't address:

The Coming Collapse of the : And what you can do to prevent it. By Robert A. Hall
http://www.amazon.com/Coming-Collapse-American-Republic-prevent/dp/1461122538/ref=sr_1_5?s=books&ie=UTF8&qid=1304815980&sr=1-5
All royalties go to a charity to help wounded veterans. For a free PDF of this 80-page book you can read on your computer, write me at: tartanmarine(at)gmail.com.

Given these candidates we are doomed. As a protest:

I have decided to vote for Evan McMullin for President.
http://tartanmarine.blogspot.com/2016/09/i-have-decided-to-vote-for-evan.html 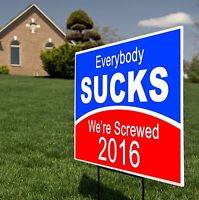 Posted by TartanMarine at 9:04 PM