The below is from my first book "The Good Bits," describing my debate with Senator Joe Ward (D-Fitchburg, MA) when I was running against him in 1972. Someplace I have a better photo of the debate (where I have my eyes open!), framed, and packed away with my office stuff. The ones below look like it was so easy I was napping! Like Trump in the first debate, and to a lesser extent , Joe interrupted me frequently when I was speaking. I politely let him spear--I don't think rudeness plays well with the voters watching.  ~Bob

Joe Ward was considered the best speaker in the Senate. One paper headlined my victory, “Silver Tongue Stilled.”
Still, no one but me thought he’d accept a challenge to debate. I knew he didn’t want to appear frightened of a young, inexperienced challenger. Whatever I might have said about Joe, he was a fighter. By luck, I found a used book about the Ward-Volpe governor’s race in 1960, The Complete Politician. Ward lost that race by being too aggressive, by going on the attack in ways the public thought unfair. And he had a temper.
So a debate was set, in , the smallest of the three cities in the district. Held at , my alma mater, with professors on the panel, the vote was broadcast on the local cable station. I’d guess there were at least 20 people watching.
Joe came in full of confidence and without checking the rules carefully. When told they were going to flip a coin to determine who went first, he replied, “Oh, let the challenger go first.” Very generous, of course, but it meant he went second, and could hit me without rebuttal, going into the question phrase.
But since it meant I got the closing statement at the end of the debate, I agreed.
I had three issues: government reform, taxes and being a full-time senator, and I knew to “stay on message,” as the politicians now say. But a hidden issue was Joe’s law practice. The word on the street was that if you lost your driver’s license, for $500 Joe would get it back. This was perfectly legal. If you gave Senator Hall $500 to get your license back, it would be an illegal bribe. But if you gave it to Senator Ward, an attorney, it was a legal fee. And if he was more effective with the court or registry of motor vehicles due to his public office, well, welcome to democracy.
Of course, we couldn’t prove this, so I couldn’t say it. But hints are fair, right?
We hammered away at each other, with me working hard to get him angry. When it came time to make my closing statement, I judged his mood, took a breath and a chance, and closed with, “I want to promise you one thing. When you bring your problems to Senator Hall, you won’t have to bring your checkbook.”
Boom! Joe leaped up and began yelling at me. The cameras kept grinding. The moderator tried to tell him that, under the rules, I had the closing statement. He kept yelling. I offered my hand, which he refused, on camera, calling me a “snide, slimy young man.”
I resisted the impulse to kiss him, though I couldn’t have been happier with the outcome.
Reporters asked me about my closing statement. I said I thought there was an inherent conflict of interest between accepting legal fees to represent clients before courts and state agencies, and accepting pay as a senator to set the budget (and pay!) for those courts and agencies.
The next day we demanded an apology, in ads and news releases. The debate was a hot topic of conversation, and every cable station in the district re-ran it. Thousands watched. Suddenly, one mistake by the incumbent, and I’m a serious candidate.
Joe was 89 when he went to his reward in 2003. He never did apologize for the name-calling. But I didn’t really mind. 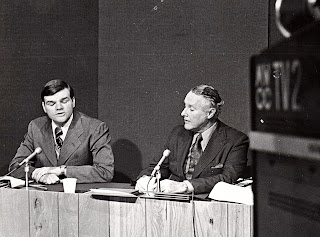 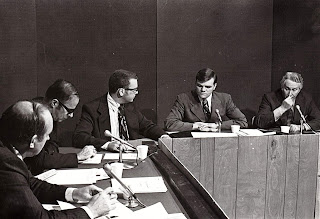 Posted by TartanMarine at 11:14 AM