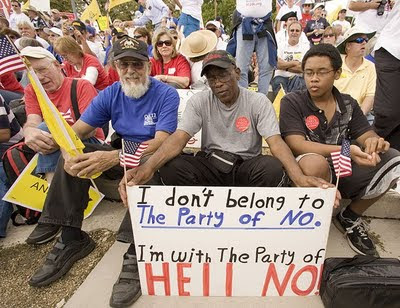 Couple of the Racist Protesters. 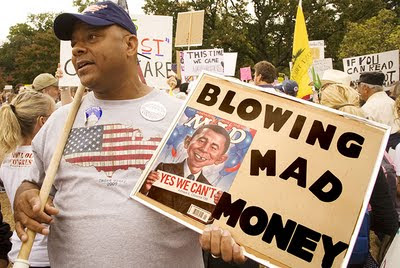 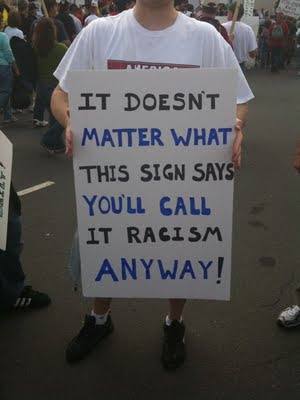 When they attribute all opposition to a black politician to racism, or excuse the corruption of black politicians like Roland Burris and Charlie Rangel because of race, they feed racism. Which black leaders and liberals want to keep alive, as their support base depends on it. Where would they be without racism to blame and to fire up their supporters? As long as racism can be used to give power to some black leaders and to liberal Democrats, racism will be alive and well in America, because they will feed it.

As long as it's "racist" to condemn the ghetto life style of violence, drugs and anti-education, blacks will suffer most, but their leaders won't care, because power matters, not the fate of poor black folks. As long as it’s “racist” to point out that it’s blacks who most often murder black kids and victimize other blacks, the violence will continue. (See the Burr Oak Cemetery scandal. If Burr Oak had been white owned and run, Al Sharpton and Jackson would be on TV every day, using it.)

You hear on TV that a black man can’t get a cab at night, when a white man can, because of racism, even though most cabs are driven by minorities, not white rednecks. Maybe they should do a study to prove it. How many cabbies are robbed and murdered? And what is the race of the perpetrators, when known? Do blacks rob cabs no more frequently than their proportion in the population? Or do the cabbies have good reason to be afraid for their lives? How about some data? Or is asking for the facts “racist” in itself?

John Kass reported in the Chicago Tribune that Jessie Jackson had attacked Budweiser for the company's supposed racist policies, pouring a Bud on a Chicago street with the immortal words, "This Bud's a Dud!" Bud got the message and gave Jackson's sons exclusive distribution rights, after which, with money in the family pocket, Jackson discovered that Budweiser was okay on race after all. Stories like that make racists out of folks the KKK never could touch.

When Democrats vow that no one appointed by corrupt Democrat Governor Rod Blagojevich will be seated, then seat Roland Burris because he's black--and cap that by taking no action when it turns our Burris was bidding for the seat with Jessie Jackson Jr. (Candidate #5 on the tapes)--it breeds racism.

Am I a racist for opposing Obama's policies? I think Dr. Thomas Sowell is the smartest economist in the country, promote his books like Basic Economics, and wish politicians would listen to him. I'm very sorry that Michael Steele was defeated for the US Senate by a white Democrat. I supported Sen. Ed Brooke against the white, liberal Democrat, Paul Tsongas, who defeated him. I think liberal Democrats who attack black conservatives are the real racists, incensed that these "uppity blacks" don't follow the party line and instead think for themselves.

More on Racism in tomorrow's blog:

Jimmy Carter's Ill-Advised Effort to Atone
http://townhall.com/columnists/MattTowery/2009/09/17/jimmy_carters_ill-advised_effort_to_atone
Excerpt: There isn't a living political expert from that bygone era who doesn't know that gubernatorial candidate Carter -- running against the progressive Carl Sanders -- said many times in public appearances that he was a Lester Maddox Democrat. That doesn't mean Carter was spewing racial epithets. It does mean that he "played the race card" himself to get elected. What's unfortunate is that Carter now has chosen to flip that race card over and play it for the opposite effect he sought a generation ago. Though no racist himself, Carter now perhaps is seeking atonement for his campaign rhetoric of years past.

Jimmy Carter's racist campaign of 1970
http://www.washingtonexaminer.com/opinion/blogs/beltway-confidential/Jimmy-Carters-racist-campaign-of-1970-59499482.html
Excerpt: Readers should refer to Stephen Hayward's The Real Jimmy Carter if they want a taste of the out-and-out racism that Carter employed in order to defeat moderate former Gov. Carl Sanders for the Democratic nomination that year. As Hayward's book points out:
· Carter's top campaign staffers were spotted distributing grainy photographs of Sanders arm-in-arm celebrating with two black men. Sanders was a part-owner of the Atlanta Hawks, and in the photograph he was celebrating a victory with two players who were pouring champagne over his head. Carter's leaflet was intended to depress Sanders's white vote.
· "The Carter campaign also produced a leaflet noting that Sanders had paid tribute to Martin Luther King, Jr."
· Carter criticized Sanders, a former governor, for preventing Alabama Gov. and notorious segregationist George Wallace from speaking on Georgia state property. "I don't think it was right for Governor Sanders to try to please a group of ultra-liberals, particularly those in Washington, when it means stifling communication with another state," said Carter.
· "'I have no trouble pitching for Wallace votes and black votes at the same time,' Carter told a reporter. Carter also said to another reporter, 'I can win this election without a single black vote.'"
· Upon receiving the endorsement of former Democratic Gov. Lester Maddox, Carter responded by praising the life-long segregationist: "He has brought a standard of forthright expression and personal honesty to the governor's office, and I hope to live up to his standard." Maddox had not only refused to serve blacks in the restaurant he once owned, but he had also greeted civil rights protestors with a gun, and made sticks available to his white customers with which to intimidate them.

Democrats Jumping the Race-Card Shark
http://www.americanthinker.com/2009/09/democrats_jumping_the_racecard_1.html
Excerpt: Tuesday, a Congressman from my home state of Georgia, Rep. Hank Johnson said that if the House didn't censure Joe Wilson, then folks would "put on the white hoods and roam the countryside." Congressman Johnson seems to have forgotten that most of the KKK men, to whom he is referring, were Democrats, the architects and masters of real Southern Apartheid, Jim Crow. Heck, Senator Byrd is still there and he was one. A rather inconvenient fact, however, is that the only reported act of racial violence so far happened on Tuesday on a public school bus in St. Louis and the offenders were black, the victim white. An apparently unprovoked attack on a high school student took place over - get this - a seat on the bus. The irony is downright nerve-wrenching. A black student beat the white student to the cheers of his black classmates and the bus driver supposedly did nothing to intervene. KKK in reverse? That's a lot more violence than Rosa Parks got over her seat on the bus. In fact, Rosa Parks wasn't on the receiving end of anything more than arrogant stares. Police suspect race was the motivating factor in the St. Louis school-bus attack. Now, it's pretty darned hard to polarize the entire white-conservative citizenry in pure Alinsky fashion. Evidently, though, this is going to be the line of attack. What's obvious, however, is that this is the most desperate move yet to shore up the failing grades of a president in over his head. And it certainly does appear orchestrated. DNC, anyone?
Posted by TartanMarine at 7:34 PM