Pics from our trip to MO, TN and LA

In the pool and the hot tub in Covington, LA, 52 miles N. of New Orleans. It was about 84 degrees. We did NOT go into the N.O. Bonnie swam, I waded. 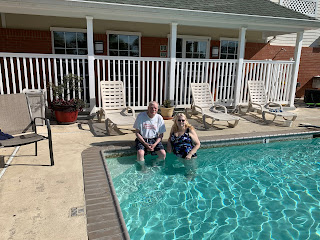 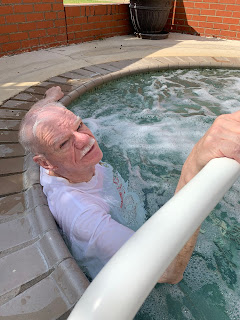 Char grilled Oysters at Don's seafood shack. We had them three nights in a row, at Don's, Chimes and Buster's Oyster Bar. And shrimp 2-3 times. All closed now for the duration, take out only. And I came back 2.9 pounds down from the day I left! 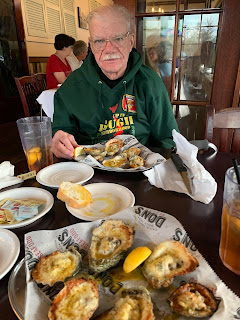 Dinner with our friend Donna Payne at Chimes. We met her when she was going through the lung transplant program with her late husband, Marine John Payne. They became family. We met for dinner with Marine buddies, Bill Rajewski, (see all evil), Mike Sherin (hear all evil) and of course me, (say all evil) in Columbia, MO on the way down. Bill and Mike were in Radio Relay tech school at MCRD San Diego with me in 1965. Bill owns a huge body shop in Columbia, Perry Legend. He said at 73 he doesn't work as much, 9-5:30, down from 7 to 7. He was off the day we left, was going to cut down trees for his new lakefront home. Mike is a retired prison psychologist. 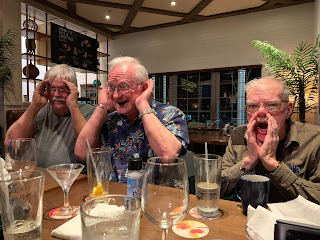 The next night we had dinner with Master Gunnery Sergeant John Lewis, USMC (Ret.) (Center) and his bother, Eddie, like me a former SSgt, in Millinton, TN. 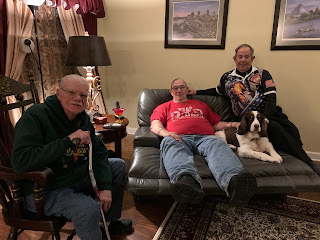 We came home safe and sound three days early, given the current panic & closings. In all, a great trip.