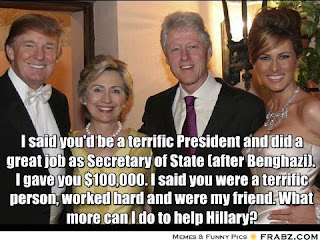 Don't know who to vote for? Here's the inside scoop on Hilary Clinton from a good friend who knows her really well and admires both her and Bill:

Trump once wrote Hillary Clinton would be 'great president'
http://thehill.com/blogs/ballot-box/presidential-races/264386-trump-once-wrote-hillary-clinton-would-be-great-president

Trump on Hillary
https://www.youtube.com/watch?v=xM8jfZTC6Mo
Excerpt: TRUMP:  Hillary Clinton, I think, is a terrific woman.  I mean, I'm a little biased because I've known her for years.  I live in . She lives in . And I've known her and her husband for years and I really like 'em both a lot and I think she really works hard and I think she, again, she's given an agenda that's not all of her, but I think she really works hard, and I think she does a good job.  And I like her. VAN SUSTEREN:  She says she's out at the end of this term. Do you think we're gonna see her again running for office? TRUMP:  I think so.  I think, you know, assuming she's healthy, which I hope she will be, I think she probably runs after the next four years, I would imagine. VAN SUSTEREN:  You support her? TRUMP:  I don't want to get into this because I'll get myself into trouble -- VAN SUSTEREN:  That's why I asked you, to see what kind of trouble. TRUMP:  I just like her.  I like her, and I like her husband.  Her husband made a speech on Monday at Mar-a-Lago, and it was very well received.  And he's a -- he's a really good guy, and she's a really good person and woman. (And he said she did a good job as Secretary of state--this was AFTER .)

Trump Praised Hillary on in 2007, Blasts Deal Today
http://www.weeklystandard.com/trump-praised-hillary-on-iran-in-2007-blasts-iran-deal-today/article/990016
Excerpt: Back in 2007, Trump praised Hillary Clinton among the presidential candidates then as someone who could make a good deal with . "Hillary's always surrounded herself with very good people," Trump told CNN's Wolf Blitzer in 2007. "I think Hillary would do a good job."

Posted by TartanMarine at 5:36 PM