The First Salute by Barbara C. Tuchman
https://www.amazon.com/First-Salute-Barbara-W-Tuchman/dp/0345336674/ref=sr_1_1?s=books&ie=UTF8&qid=1468107578&sr=1-1&keywords=First+salute
The late Barbara Tuchman was a wonderful historian and writer. I read everything by her I can get my hands on. This interesting oblique view of the American Revolution is no exception. She starts with the Dutch support illustrated by the first salute to an American ship ( went to war with them over their support). It focuses on the French and British navies, the high commands on both sides which displayed incredible incompetence. She reports that one of the things that hamstrung the royal Navy was the "fighting instructions," the ROI of the day. An Admiral Mathews was court martialed for ignoring the prime signal "line ahead" to attack without all his force. Later Admiral Byng was court martialed for not breaking "line ahead" and attacking before all his ships came on line, and was shot! Tough ROI. She also reports that an school boy, John Clerk, playing with toy sailing ships, came up with a new tactic for breaking "line ahead," that he published as a young adult. Admiral Rodney had a copy and used it successful a couple of times. I suspect that Nelson may have as well at Trafalgar. Clerk, "Possessor of that alert Scottish intelligence that so often caused uneasiness below the border, Clerk noticed the major flaw in line ahead that if the enemy did not offer himself in a comparable line, there could be no fighting that day under the rules of Fighting Instructions. As he watched his little ships move as directed by the breezes, he evolved the solution for breaking the deadly grip of the line. It was to allow the full line to concentrate against one section of the enemy, instead of each ship against its opposite in line, thus smashing a gap through which to penetrate and 'double' the enemy while it was caught in the slow process of coming about and sailing back into the wind to assist it's companions. ... he explained his thesis in a small book An Essay on Naval Tactics which, circulating among friends and naval enthusiasts, found a publisher, and soon came to the notice of Naval Professionals, among them Admiral Rodney." Tuchman has a terrific eye for what she calls the "corroborating detail," the small thing that illustrates the main point, without burying you in every known fact. In an essay published elsewhere titled, "Biography as a Prism of History," she says, "Unhappily, biography has lately been overtaken by a school that has abandoned the selective in favor of the all-inclusive. I think this development is part of the anti-excellence spirit of our times that insists on the equality of everything and is thus reduced to the theory that all facts are of equal value and that the biographer or historian should not presume to exercise judgment. To that I can only say, if he cannot exercise judgment, he should not be in the business." Having waded through-or tried to-books that buried the story in a avalanche of details, I greatly appreciate her ability to be selective. This book is not to be missed by military history and American Revolution buffs.

Expendable Warriors: The of Khe Sanh and the Vietnam War by Bruce B.G. Clarke
https://www.amazon.com/Expendable-Warriors-Vietnam-Stackpole-Military/dp/0811735370/ref=sr_1_1?s=books&ie=UTF8&qid=1468109234&sr=1-1&keywords=Expendable+warriors
This book had great personal meaning for me as it focused on the under-reported NVA battalion or regiment sized attack on Combined Action Company Oscar and the district headquarters in at the start of the siege of Khe Sanh in January of 1968. The small group of Marines, Soldiers (the District Advisory team, and local Vietnamese troops, mostly Bru Montagnard tribesmen, fought off the attack, delayed the NVA plans for Khe Sanh and inflicted great casualties.  I was TAD with my Radio Relay Team to CAC-O for August and early September in 1967, so knew the places and some of the players. Photos in the book match some that I took. The NVA used the , right outside the CAC compound, as a firing point, which came as no surprise. Across from the entrance to the CAC and district HQ was "Howard Johnsons," where mama-san sold food and over-priced cold beer and soda to the troops. But it was cold, so we paid it. 9things were pretty quiet then--I like to say they were scared to attack while I was there!) But I'm proud of what these Marines, Soldiers, Bru and Vietnamese did there. Then-Captain Clarke was the district advisor starting in August, though as a Marine I reported to the Marine CAC CO, not to him, so probably saw but never spoke to him. This is the most detailed account of the village fight that I have read. Of course, all combat accounts have those who dispute some details--the fog of war. Clarke notes some of this where accounts he draws on disagree. People interested in the successes of the combined action program or the Vietnam War in general will not want to miss this book.

My pictures, below, are similar to ones in the book. 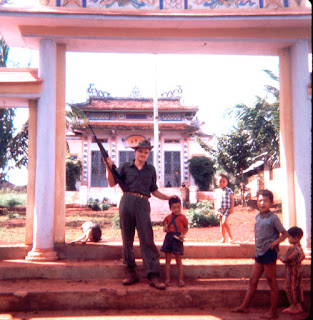 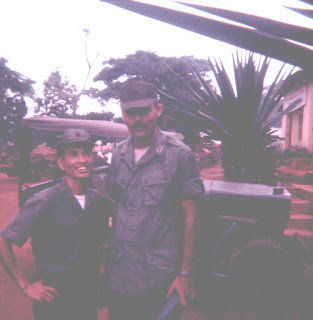 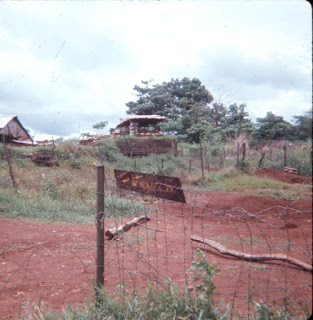 Posted by TartanMarine at 7:33 PM