We learned today with great sadness of the death of my Marine Brother LCpl John Payne, of John received a new lung through the hospital in December of 2013, five days before I received mine. We both had Pulmonary Fibrosis. 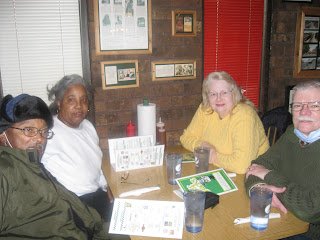 John and Donna Payne with Bonnie and me during a meal out.

We met John and Donna early in October of 2013 when we were both put at the top of the transplant list. We saw each other two or three times a week in Physical Therapy. Since they were stuck in the hotel, we made it our mission to get them out shopping, to eat and for drives in the country. While I would of course do this for a brother Marine, as would John, we quickly became a part of each other's families.

John was drafted in to the Corps and of course sent right to the infantry in . He saw a lot of combat, and as one of four survivors was badly wounded in the head when his platoon was overrun. He had the scars and Purple Heart to show for it. He was a laid back guy, not boastful, and you had to drag this information out of him. Donna told us he only received his Purple Heart--in the mail--about seven years ago. (I'd have been beating on someone's door!)

John remained a patriotic Marine all his life. Once he said to me, "Bob, there's a lot wrong with this country. But if you don't like it here, if it's not working for you, why wouldn't you go live somewhere else." One time I asked him for his take on the riots in . He said, "Bob, if a cop says stop, and you don't stop, what happens next is on you." Both John and Donna grew up in the Jim Crow south and were subject to discrimination that is now hard to understand, yet both love .

In addition to his wounds, John had previously survived cancer and two bad motorcycle accidents.

When we learned that John had been placed on in-home hospice care, Bonnie and I left on May 1 to drive to , a thousand mile trip. John was still lucid, we had the chance to meet Donna's wonderful family, and Bonnie got her out and about which I stayed with John, which took the pressure off. So we knew his death was coming, though he remained upbeat and said he was getting stronger! We are so glad we went while he was alive and didn't wait for the funeral.

Here are photos of their family from that trip: Visiting John and Donna Payne
http://tartanmarine.blogspot.com/2016/05/visiting-john-anddonna-payne-those-who.html

May seems to be a bad month for us. Two years ago I wasn't expected to live. Last year, we lost four people around us, including Bonnie's mom. And two weeks ago, Britnye's dad, Otoniel Vela, died at 54 of leukemia in .

Both Bonnie and I will greatly miss John, and our hearts and prayers go out to his family. ~Bob

Posted by TartanMarine at 3:16 PM