Not all about being a warrior is glamorous

He's probably a Lance Corporal. His bed--a dirt floor of some compound in Afghanistan. Pajamas? --What he's got on 24/7.

He faces daily people who try to kill him. How much should he get paid for that? How do people in Government justify that? "Oh, but he gets free food, housing, and medical care."

Well, Guess What--those same people would cut that out-readily and willingly to "Cut the Budget."

Sometimes yes, sometimes the bureaucrats at the VA and Congress people try to cut those things too , claiming it is "Saving Money."

Why does he do it?

Because he is one of the remaining REAL Americans, who believes in taking risks and doing a hard job for the freedom he has at home.

Who are his enemies?

Religious fanatics that believe in killing is a way to further your"Religion."

Pandering politicians who would rather see him dead than offend a potential voting sub-culture. 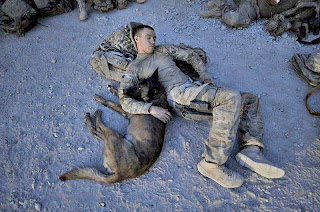 Posted by TartanMarine at 6:00 AM