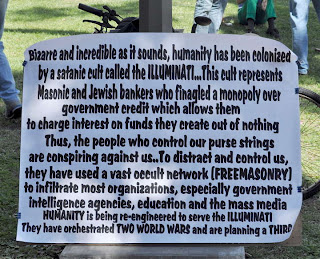 More Anti-Semitism at Occupy
http://pajamasmedia.com/tatler/2011/10/13/more-anti-semitism-at-occupy-los-angeles/
Excerpt: While there have been intense arguments in the media recently about hints of anti-Semitism which have erupted at ’s Occupy Wall Street protest, very little attention has been paid to similar problems cropping up at other “Occupy” events around the country. Below you will find some photographs and a video taken at the Occupy Los Angeles encampment which reveal how there is a growing encroachment of anti-Semitic “Jewish bankers” conspiracy theories becoming more and more evident at these events. Obviously not everyone at the “Occupy” protests is an anti-Semite, but the fact that these statements and views fit so neatly into the whole anti-banker milieu, and often go completely unchallenged by fellow protesters, should give everyone cause for concern about where this whole movement is heading. The first four pictures show the signs close up. The second four pictures show the same signs in context as they appeared at the Occupy Los Angeles protest, to prove beyond any doubt that these are authentic. Below them is a video of an Occupy Los Angeles speaker spinning more conspiracy theories.

Posted by TartanMarine at 10:37 AM