Elizabeth Warren vs. the Jews

Elizabeth Warren is running for office in the most high-profile race in the country not involving Barack Obama. It’s a position that calls for some tact. So what does she think about the Occupy Wall Street protests that are roiling the country?“I created much of the intellectual foundation for what they do,” she says. “I support what they do.”

What "they do" includes drug dealing, crapping on the US flag and police cars, raping 14-year-olds, stealing from each other (all reported in the media) and anti-Semitism. 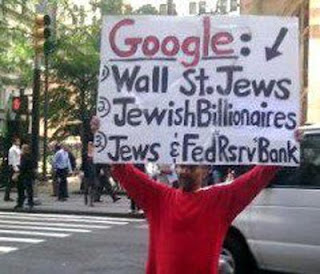 The Anti-Semites of Occupy Wall Street


http://frontpagemag.com/2011/10/26/the-anti-semites-of-occupy-wall-street/?utm_source=FrontPage+Magazine&utm_medium=email&utm_campaign=e807be67de-RSS_EMAIL_CAMPAIGN
Excerpt: There is a disturbing undercurrent to the current Occupy Wall Street movement.  It isn’t merely its passionate denunciations of capitalism and excuses for corporatism.  It isn’t merely its perverse love for a president who has received more Wall Street money than any candidate in American history, and its hatred for Wall Street itself. It’s anti-Semitism.Even as President Obama comes out in support of Occupy Wall Street, more and more Occupy rallies are laced with anti-Semitic signs, placards, and slogans.  In , ralliers hold signs reading, “Google: (1) Wall Street Jews; (2) Jewish Billionaires; (3) Jews & Fed Rsrv Bank,”  “Gaza Supports The Occupation of Wall Street,” and shouting ugly canards like “Jews control Wall Street.”  The American Nazi Party is supporting OWS, with leader Rocky Suhayda stating, “Who holds the wealth and power in this country — the Judeo-Capitalists.  Who is therefore the #1 enemy who makes all this filth happen — the Judeo-Capitalists.”
Posted by TartanMarine at 10:27 AM