My New Book is out: The Coming Collapse of the American Republic--Updated! 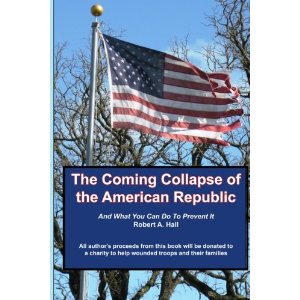 The Coming Collapse of the
And what you can do to prevent it
by Robert A. Hall


The Coming Collapse now available as an e-book!
http://www.smashwords.com/books/view/59105
They tell me the have versions that will work on all readers. The price for an e-book is only $7.99, but because of reduced production costs, the veterans’ charity will still get the same royalty. And I’ll still get nothing!


Barnes and Nobel has Collapse at a discount!
http://www.barnesandnoble.com/w/the-coming-collapse-of-the-american-republic-robert-a-hall/1031109891?ean=9781461122531&itm=1&usri=coming%2bcollapse%2bamerican%2brepublic

Book description from the CreateSpace website: The Coming Collapse of the American Republic draws together extensively-researched details about four threats which are combining to destroy the future for our grandchildren: 1. The incomprehensible debt and unfunded financial liabilities of all levels of government; 2. The threat of uncontrolled, illegal immigration to our economy and culture; 3. The asymmetric war imposed on us by Islamic Jihadists; and, 4. The rise of China as a competitive military and economic power determined to dominate Asia. Taken together, these desperate trends put the survival of as a united, free and prosperous country in great jeopardy. This short volume lays out the reinforcing nature of these converging disasters, details the existential threat they pose to American liberty, society and culture, and tells us not only how we got in this trap, but what the horror of a collapse will look like. And it offers a long, difficult and rocky path to preserve the country we have known and loved for future generations.

It's short, just 80 pages from the Introduction to the Conclusion, plus 26 pages of resources and references for the citations in the book.

There is no way a book like this will be reviewed, especially favorably, in the mainstream media. And with no income from it, I have no marketing funds. If it is to reach a large audience, I need your help to develop word-of-mouth marketing and make it viral on the Internet.

And thank you for helping wounded troops and fighting for the future of .


Feedback on The Coming Collapse of the sent to me.

Just finished the new book. The most politically-incorrect publication I've ever read. I loved it. I'm ordering 20 copies for my insensitive friends. --Pete.

For the folks concerned about the "depressing times," I recently read a short book by Robert A. Hall titled "The Coming Collapse of the American Republic: And what you can do to prevent it" (I bought it on Amazon.com). The author has considerable experience as a state legislator and has been executive director for several professional associations (including the Florida Psychological Association). Not only does he analyze what is happening and what caused it, but he offers seemingly astute recommendations for remedies. He does not consider one political party to be more or less at fault than the other--it is the system that is the problem. Certainly psychologists have the potential to change the system. --Cordially, Bob Woody

Hi Mr Hall, I just wanted to send you a note to let you know I read your book over the weekend and thought it was great!! I told (my bosses) to get on it and read it!! Wow! You hit the nail on the head and I'm thinking of several people I want to get the book for because I think they would really enjoy reading it. I was working out all weekend, training for my Ironman Triathlon in September and it has consumed my life for several months. After reading your book it made me realize how trivial that is and that I'd better start paying more attention to the rights and freedoms that are slowly and surely being taken away from me. Also that I'd better learn how to use to use the guns we have in the house (my husband has been telling me that for years)! --BL

Bob: I read your book. It’s great! Almost staggering in depressing statistics but your humor keeps the reader from blowing his brains out. You could probably get the Republican nomination for president, at least the Tea Party’s, if you got your book widely spread and in a platform format with your solutions. I couldn’t agree more with your assessments of our problems. Re though, I’m not sure that will not rule the world as Spangler predicted. All they have to do is remain the last man standing. Anyway, I’m ordering copies for numerous family members from Amazon. ... Again, that’s a great piece of work! Semper Fi, John

Bob: Just thought you might like to know. I went on the amazon.com Web site and ordered "The Coming Collapse, etc." for myself. While I was at it, I also ordered four more and had them sent to four like-minded friends, too. BTW, I sent your books info to another friend who lives in a small town just outside of SLC in . She e-mailed me saying that she liked it so much that she bought six more copies and then hand delivered them to libraries in SLC and her own small town, too. –Paul

Bob, I read your book on my flight to last week. I think youre right on target. I already gave it away and I would like to give a few more to friends. Can you get me ten more and sign them for me? Or would it be easier for me to order them and have them sent to you? Just let me know what would work best for you.--Mike

Robert A. Hall, in his book, The Coming Collapse of the American Republic, provides the reader a guide book containing a concise and detailed view of the problems which could cause the collapse of the republic, if unsolved. Hall provides detailed descriptions of the major issues such as government funding (the lack of) at all levels of government. The list of issues continues on with immigration policy, followed by naming our external enemies, and Islamic extremists. After listing the major problems, Hall discusses how the Republic got into its present position. Next, Hall describes a political action campaign vis-a-vis saving the Republic. He does not minimize the effort to prevent the collapse. These are major issues which the Republic faces and needs to resolve. Thus in summation, Robert A. Hall has provided a guide to understanding issues which could cause our Republic to collapse. He also provides an itemized political action plan for saving the Republic. This is his guide book to saving our Republic and is worth a read for the clarity it provides. --Ronald E. Haglund, BS.EE, MS.EE, Ph.D.EE

I have just finished the book.  It is only 80 pages with an extensive reference list.  I would recommend to all who are concerned about our nation and their own families.  I am no survivalist but this is a real wake up call.  I am going to get three more: one for my representative in the house and one for each senator.  They probably will not read it as their schedules are too busy getting reelected.  And yes they are Republicans but this should be required reading for all legislators.  Not for Obama though, because I do not believe he is willing to do a thing to head these potential, perhaps probable, events off. –Jim

For all, I just finished reading Robert Hall’s book “The Coming Collapse of the ”. Bob has advertised his book on his email blog posts, which I frequently send out to you.  Bob is a former Marine Corps Staff Sergeant (Vietnam Veteran), non-profit executive, and Massachusetts State Senator.

I highly recommend you read this book now! Click on the link below to order the book from Amazon.com.

There are 8 chapters in the book and a conclusion. The Chapters include:
-The Federal Government is broke. Really.
-The States are Broke Too. So are the Cities.
-Destroying Through Immigration.
-The Twin Jihads-Working in Tandem to Wreck the Republic.
--Does the Dragon Awake?
-What will a Collapse Look Like?
-How did we Get in This Mess?
-What Can you Do to Prevent a Collapse.

Bob talks about the 4 major disasters threatening our country, culture and way of life, and he provides the facts and statistics to support his perspective about the Coming Collapse of the .

There is just a wealth of knowledge in this book.  When I read chapter 6 “What Will a Collapse Look like”, I had to take a break to think about what I must do to protect my family beyond what I have done the past year. One thing for sure, I’m not moving fast enough. For some of you, this factual perspective may be the catalyst for your own preparation. Bob does provide thoughts on what you can do to prevent a collapse, but don’t hold your breath on this one. Bob says that “I have only the Churchill solution to offer: Blood, toil, tears and sweat. The more toil, tears and sweat now the less blood later. But I think bloodshed unavoidable”.

I learned a lot about Bob by reading this book. He is a very smart man, and a creative writer. I particularly like his writing style, which includes some humor. He is also a Patriot and doing his part to educate the public with his book and blog: www.tartanmarine.blogspot.com.

I’m buying this book for all my children and other relatives.

All the book proceeds will be donated to a charity to help wounded warriors and their families.

Someone asked if I'd received any negative feedback on the book. So far, only one. A fellow wrote and said he'd read the first 8 pages on line, it was full of the typical rah-rah stuff, he wasn't interested in reading more. He went on for several paragraphs about 's failings, ended that he couldn't wait for the collapse. Since he only read eight pages, I didn't consider it a real review. Maybe ten, okay.

Posted by TartanMarine at 2:37 PM

Labels: Robert A. Hall, The Coming Collapse of the American Republic