Update: John received a new lung on 2/18. I received one on 12/23. Both out of hospital and doing well, now hitting rehab PT together. ~bob

Update: My friend and brother Marine John Payne got the call for a new lung at about 8:30 am this morning (Tuesday, December 17, 2013). He is now scheduled for surgery tonight about 11:00 pm. We are both O blood type, but I'm not surprised. I told the transplant coordinator that I thought John was weaker than me, and should go first. Personally, I think John arranged this to skate out on PT this morning. If you are the praying type, say one for that good man. ~Bob

Update: The operation for John Payne's lung transplant started at 2:30 am on Wednesday, December 18, and at 7:30 we heard from Donna that he came through fine. ~Bob 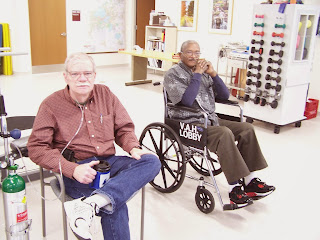 Click on pictures to enlarge. This is me (left) with my friend and brother Marine Vietnam vet, John Payne. We are both on the O blood type list for lungs for PF at the Madison, VA. Hard to tell which will go first--too many factors. Here we are waiting to start rehab today. 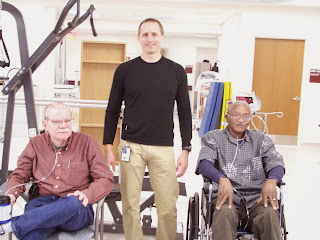 With Jim, our DI (physical therapist). 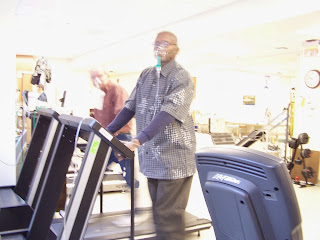 Here we are starting 30 minutes on the Treadmill. Being Marines, we are a tad competitive. John is a year younger, but saw more action in Vietnam, being infantry, and has the scars to show for it. 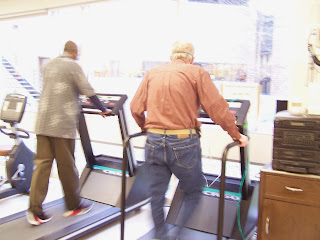 And we continue to march. I tend to chant boot camp cadence in my head to keep going. I could go longer, but the coughing lowers my O2 levels.
Posted by TartanMarine at 5:18 PM