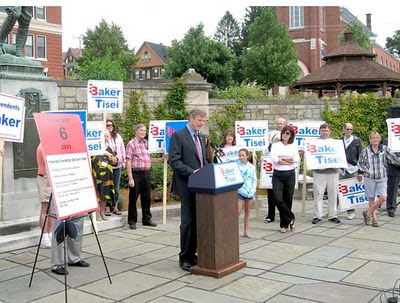 For those who note the number of comments in this blog from Ron P. a Marine comrade in arms starting in 1964, that's him in the plaid shirt behind the candidate, Charlie Baker. ~Bob


Charlie Baker returns to Marlborough
Excerpt: Marlborough - Republican candidate for governor, Charlie Baker, stumped in Marlborough this morning and chose the Doughboy Monument as a backdrop for his visit. “I am always happy to come back to Marlborough,” he said, adding that he was appreciative of the enthusiastic and positive response he received while walking the parade earlier this week on Labor Day. Traditionally seen as a Democratic city, Baker seemed to be more welcome in Marlborough on Monday than his Democratic rival, incumbent Deval Patrick, who was actually booed and cheered while walking the parade.
http://msjnews.com/
Posted by TartanMarine at 11:33 AM