Would you vote for this guy for mayor?

Do you support this guy for mayor? By Robert A. Hall

Let's say that you've lived in a town for over 30 years. And let's say you love dogs. You own three who sleep with you and your wife on your king size bed. Your wife works at a shelter and often brings home strays to foster. You spend all your free time walking with, training or playing with the dogs. Lucky for you, most people in your town, at least 70%, love dogs.

Except, of course for that guy two houses down on the other side of the street.  He hates dogs. He yells at you if your dogs do their business on his curb, even though you pick it up. He leaves nasty notes in your door and calls the cops to complain about your dogs barking at night, though they sleep in your room, so you'd know. He writes anti-dog letters to the paper. He lobbies the council for higher licensing fees and anti-dog ordinances.

That is, until last year he when decided to run for Mayor. Now he loves dogs. He bought a Golden Retriever he takes everywhere. He promises that if elected he will lower licensing fees, build more dog parks and make all city buildings dog-friendly. He promises to expand the shelter and make sure only no-kill shelters can open in your town.

Do you believe he now loves dogs? Do you get on his political bandwagon and slam anyone who opposes him?

So now comes Donald Trump. For over three decades, Trump has:
As a candidate, Trump has:

I voted for Evan McMullin for President.
http://tartanmarine.blogspot.com/2016/09/i-have-decided-to-vote-for-evan.html

22 Reasons Principled Conservatives can Never Vote for Donald Trump. By Robert A. Hall
(And Hillary is just as bad, though it's a toss up which will be worse for the country.) 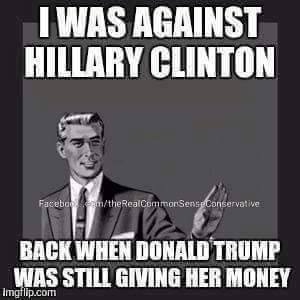 Posted by TartanMarine at 12:41 PM