Guest Post: When is a cut not a cut?

There has been very little reporting in the past days and weeks about the real and growing level of federal spending.  All that is discussed is the amount of "cuts", all of which are spread over 10 years.  Wonder why the focus is on 10 years and not this year or next year?  Because there are almost no real reductions to current spending.  The maximum debt level is increased effective immediately but the spending reduction is advertised to occur at some unspecified time over 10 years.

The problem is the federal government employs "baseline budgeting".  This means that the annual budget is first assumed to grow at a rate of inflation plus a few other factors.  Any reduction from this assumed inflated level is then called a "cut".  The current baseline annual budget grows steadily from $3.8 trillion in 2011 to $5.7 trillion in 2020.  (See chart below.)  Total spending over the 10 years would be $47.5 trillion.  Compared to holding spending constant at $3.8 trillion per year (which would be $38 trillion over the 10 years), the baseline increases spending by a total of $9.5 trillion (= 47.5 - 38).  Thus if our esteemed federal politicians somehow voted to hold spending constant for 10 years, this would be considered a $9.5 trillion cut!  There has been no conversation that would actually result in a real cut as most people would define it; only about spending less than the inflated baseline.

So when Republicans crowed about cutting spending $3 trillion and the Democrats wailed about cutting spending a draconian $1 trillion, remember that Republicans are still voting to increase actual spending by $6.5 trillion and the Democrats by $8.5 trillion spread over 10 years.  The $2 trillion "cut" that has been passed represents less than 5% of the total $47.5 trillion baseline spending (which is itself inflated by much of the 2009 stimulus spending that has become part of the baseline instead of a one time budget bump).  Wow, now that's really going to require some tough decision-making.  Even more misleading, the vast majority of the reduction is to occur in the last five years of the 10 year time period which means that Obama and our current Senate and House leaders won't have to decide what to actually cut until years from now, if ever.
For perspective, compare the 2011 federal spending of $3.8 trillion versus the federal budet in 2007 (Bush's last budget before the TARP and financial crisis spending) of $2.7 trillion, in 1999 (Clinton's last year) of $1.7 trillion and in 1988 (Reagan's last year) of $1.1 trillion.  Annual budget deficits of over $100 billion in the Bush years were considered to be out of control and this now equals Obama's monthly budget deficit!  When Clinton proposed a $16 billion stimulus early in his first presidential term, it was voted down as being too high!  The stimulus package signed by Obama in the first month of his presidency was over $800 billion (50 times greater).  As Mark Steyn says, we now have the first trillionaire spenders in history and still they want more.  How's that hope and change working out for you? 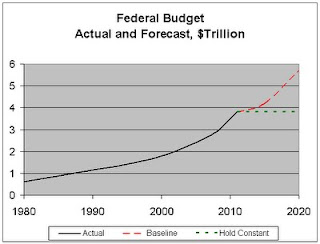 Sosurce:  http://www.usgovernmentspending.com/
This is insanity and I would ask everyone who reads this to have a long discussion with their children or other acquaintances under age 30 to inform them they will be paying the higher taxes to cover the interest and principal of this unconscionable spending if they make the mistake of voting Democratic in the next presidential election in 2012.  The economy will never recover and their job prospects will be poor.
Howard
Posted by TartanMarine at 3:32 PM