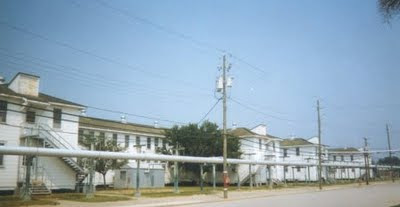 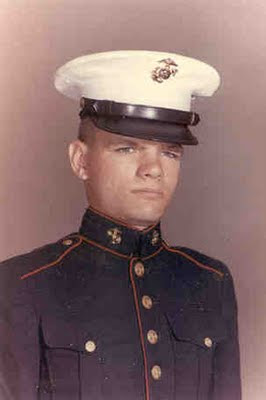 I arrived at Parris Island, SC in the early morning hours of August 17, 1964. Got off the bus, said goodbye to the Woman Marine recruit I'd been snogging with on the long drive, and was unceremoniously ushered into the receiving barracks. That started my journey to become a U.S. Marine.
Unlike most platoons, the recruits of Plt. 273 didn't meet our DIs until we had filled out some paperwork in the morning. Then they came in, the three men who were to change my life: Sgt. William H. Harris (our senior DI), Sgt. Michael P. Martin (whom we called "P.T." Martin) and Sgt. Ezekiel Owens Jr. Sgt. Owens was black, and I had heard there was only one black DI, the toughest on the island. Actually, most platoons had at least one, to avoid complains from the black recruits of discrimination. Sgt. Owens was the easiest, as his sense of humor kept coming out.
Half of our Plt. members were reservists, so we lost only two in Vietnam, which really started going about eight months after we graduated.
Forty-five years later, I remember my DIs well. Last week, I dreamt I visited Parris Island, and there they were, unchanged, faces as I remembered, training a new platoon. Maybe they are there, in spirit.
We were assigned to the Second Recruit Training Bn., known as "The Twilight Zone," pictured above. (1st. Bn. was Dodge City or Death Valley and 3rd., with new brick barracks, was Disneyland.
I remember a big guy, six foot plus, poster Marine-Greek God type who washed out after three weeks, and a little wiry, ugly guy who weighed 110 soaking wet, who graduated with us. I learned that it was heart that counts, not size.
The discipline and self confidence my DIs instilled in me has made all the difference in my having a successful life. I've talked to Sgt. Owens, to thank him. (He is retired, has a locksmith business near Camp Lejeune, NC.) I have no idea if Sgts. Harris and Martin are still living, though they were only a few years older than I at that time. I am forever grateful to them.
It's a Marine thing. You wouldn't understand.
Robert A. Hall
Once a Staff Sergeant, still a Marine.
Posted by TartanMarine at 2:00 AM