Those who follow my blog know that Bonnie and I grew very close to John and Donna when John and I were both waiting for, then recovering from our lung transplants at the I received mine on 12/23/13, John his five days earlier. 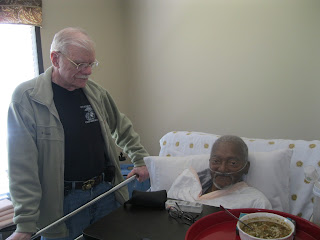 John is a brother Marine who saw a lot of infantry combat in , and suffered a bad head wound, was one of four survivors from his platoon.

When he left , he was doing better than I, but in the last six months has deteriorated badly. He is down to 124 pounds (tall guy), on oxygen, too weak to get up unassisted, sleeps a lot and is on hospice care. We decided to go now, rather than later to see him off. The trip was about 2,200 miles. 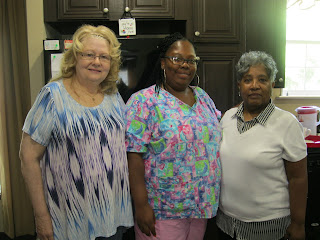 Bonnie was able to get Donna out and about for lunch, shopping and to the hairdresser's while I sat with John. Yes, Bonnie got braids put in at the same time.

We met a lot of Donna's family. Below, Granddaughter Ka'Tia, Daughter Quent, Granddaughter Bree, Daughter Carla, Grandson Scooter, and Bonnie. Her family helps a lot taking care of John. Quent is a LPN, Carla a CNNA. 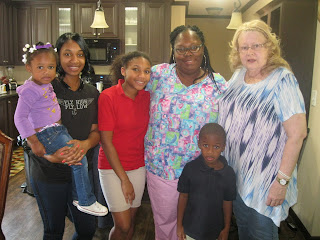 Bree (14) is a straight A student. They all are very polite (a southern thing). Ka'Tia took to me right away. 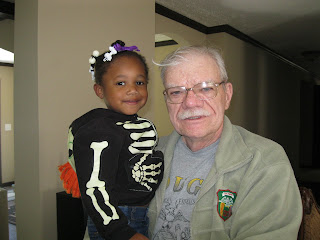 In addition to seeing them, we had some great food; charcoal roast oysters, crayfish and corn chowder, gumbo, etc. I only put on 1.7 lbs.

On the way down, at a McDonalds for coffee, the guy behind me turned out to be a friend, LtCol. Dwight Homann, (ret), about 450 miles from home. He is a collector of military rifles and a history buff. I met him through my Vietnam Marine buddy, Jack Beerup (my boss at Khe Sanh) who is a friend and neighbor. We stopped over night with Jack on the way home and spent a couple of hours with him and Dwight solving the world's problems.
Posted by TartanMarine at 10:16 PM