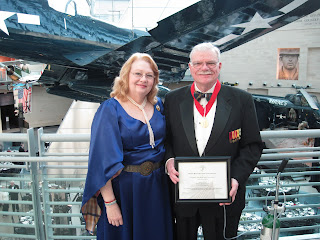 On Saturday, April 21, 2012, Bonnie and I attended the Marine Corps Heritage Foundation 2012 Awards Dinner at the Museum of the Marine Corps in . I was one of about 16 individuals receiving awards for various types of media depictions of the Corps, from photos, to books, to articles to movies. (The fellow sitting next to me at the award ceremony was the screenplay writer for Flags of our Fathers, and many other films and TV shows.) I was honored to receive the Robert A. Gannon writing award for poetry for my book, Old Jarhead Poems: The Heart of a Marine. 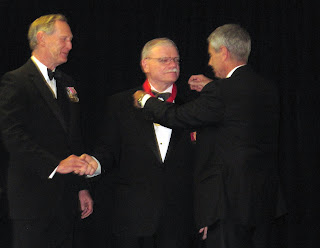 
I imagined my Senior Drill Instructor, Sgt. William H. Harris, saying, "Well, it took 48 years, maggot, but we finally found something you could do right. Now don't say something stupid when you meet the Commandant!" 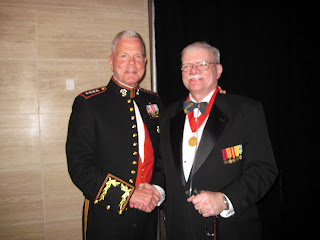 In addition to the CMC, Gen. Jim Amos, who was one of two main speakers, there were 14 other active duty generals present. We were in the drink line and I turn to see two LtGens in mess dress next to us. Never saw so many stars before. Bonnie was embarrassed when I said, "My God--The Milky Way!" They laughed, but if my DI had heard I'd be doing bends and thrusts forever. The CMC thanked me for sending him a copy of my poetry book--nice of him to remember.


In his speech, Gen. Amos said that we should look him in the eye and trust him on the budget and force levels, that the Corps will be okay, so stop bothering our Congressman about it. He also said that a retired commandant, Gen Carl Mundy, had told him, "General, you are now solely responsible for the spiritual health of the United States Marine Corps--if you fail at that, you will have failed as Commandant." He wasn't talking about religion, but what makes Marines different. The CMC commented that when he travels the country, he sometimes visits businessmen or political leaders who are Marine vets. "It doesn't matter if the guy served two years, 68--70, when you walk into his office it's like walking into the Commandant's office; the walls are covered with Marine memorabilia." I was very impressed--there's a reason this guy is CMC. Even if he did pass on the opportunity to consult with me about strategic issues! (LOL)


The other speaker was Tim Day, Chairman and Founder of Bar-S Foods Company, a former Marine officer who has done rather well in business. He received the Gen. John A. Lejeune Award for Leadership. Mr. Day and his wife have a foundation that previously donated $5 million towards construction of the museum. During his talk, he announced an additional gift of $12 million towards the planned $60 million expansion. VERY motivating. Between his generosity, the CMC's inspirational talk, and four glasses of wine, I got gung ho and gave them back the $1,000 check that went with my award. I told General Blackman that I didn't have $12 million, but if Tim Day could lead, I could at least follow.


We had two other great honors that night. At our dinner table was Col. H. G. "Barney" Barnum, USMC Ret. who earned the Medal of Honor in . He's a terrific guy, very modest as are most guys with the MOH. He didn't seem terribly impressed with my Good Conduct Medal, though. (LOL) 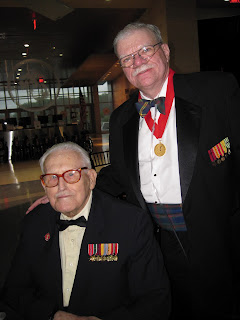 Also at our table was Norm Hatch, who was on the staff of Leatherneck Magazine in 1938. He made an award-winning movie documentary on the beech at , and was there with a camera in the thick of it in several other battles. wearing a bronze star with V plus other medals. We figured he was about 94, but sharp as anyone you could meet. In fact, sharper than most. We really enjoyed talking to him. One of the other award winners had written a book about Norm, which is on my list.


I also got to meet Col. Walt Ford, USMC Ret. the editor of Leatherneck, who has published many of my poems, articles and book reviews over the years. He and Mary Karcher, formerly of their staff, encouraged me to put my Marine poems in a book, so I owe them for the great honor of the evening. We met so many great Marines, including the SgtMaj of the Marine Corps, I can't list them all.


We spent Saturday before the dinner touring the museum, though seeing everything would take two days at least. It is not to be missed.


The MCHF has posted their pictures of the dinner here:


I can't recall a better evening. It was very motivating for an old Marine. ~Bob

Posted by TartanMarine at 5:36 PM