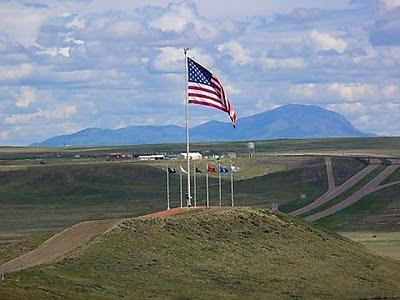 A citizen, just a citizen, frustration unbound, writes his congressmen in disbelief. Over and over again, he writes. What does he get? Political rhetoric is his answer. This is a man, who served his country and is patriotic, he erected, with friends, the monster sized flag seen below, for all to see.
Just for perspective, the “small’’ poles are 30’ high. The American Flag is 100’ in the air, right at the cross roads of I-15 and State Rte. 2. John has a DVD of the construction he would be happy to post (to come soon). I watched it and the underground superstructure to hold that big pole and flag in the MT wind is incredible! This flag is as big as Montana! Big flag for Big Sky!

However, his representative and Senators seem to not understand America at ALL! Read his impassioned letter. It is an echo of what so many think, so much frustration, so little tie to the citizen. These are just an example of how the politicians have lost their way. They have lost their focus, they are horribly out of touch with over 300,000,000 Americans. They are the few, the greedy, the power brokers, the special interests, the career politicians.

They know only power and re-election. They do not know, and are immeasurably detached, from WE THE PEOPLE!

I am writing this letter to express my utter disgust with my government officials. I have written many letters over the years to various people who have sat in the seat you now occupy. It seems to me that each response I get is worse than the one that preceded it.

The most recent letter I’m alluding to concerns the closing of the Badger-Two Medicine area to Multiple Use. I will not rehash my objections because doing so was in my first letter that you responded back to me with bureaucratic non-sensical nonsense. You managed to say nothing and just wasted your time, my time, paper, and postage. I can now truly understand why the popularity of our United States Congress is so low.

By now you are probably wondering who I am, and how dare I be so critical of your esteemed position. Read on and you’ll soon find out:

A graduate of the University of Montana in 1966.

A United States Marine Corps Officer seriously wounded in action in the Republic of South Vietnam at Khe Sanh in 1968 against the North Vietnamese Army.

Owner-Operator of a steel fabrication company in North-Central Montana employing many individuals and using hundreds of tons of steel each year for the oil, gas, and agricultural communities until mineral development became a dirty, four letter word, and the CRP Program destroying the local economies and ending my very successful business.

Spent six years as a county commissioner from Toole Country, Montana innovating many programs that were very successful and still in use today. I choose not to run for reelection, and would have been reelected had I chosen to do so.

I have watched as my government that I almost gave my life for in Vietnam (many of my buddies weren’t so lucky and were killed in RVN) flounders and spends this once great nation assets into bankruptcy for me, my wife, our children, our grandchildren and millions of other good, hard working Americans.

We watched as 3000+ Americans died on 9/11 in 102 minutes and many of you in the Congress can’t seem to get it through your heads on whether this is an Act of War or a Criminal Action akin to a holding up of a local liquor store at gunpoint—not only unbelievable, but also incomprehensible to me.

President Bush promised the American people that this GWOT (that many of you refuse to call it) wouldn’t become another Vietnam. Oh really, you sure could have fooled me. The most powerful nation on earth fighting a bunch of nomadic pirates for over eight years??

Our(My) Government sits within the safety of the beltway surrounding Washington, DC and determines the ridiculous Rules of Engagement(ROE) that our gallant warriors must fight under. Currently, many of these young warriors are now incarcerated for violating the ROE’s that a recent Presidential Candidate was awarded the Silver Star for in Vietnam.

From my first hand experience, I cannot comprehend how one of your colleagues is awarded our nation’s third highest award for valor, and others in this war are incarcerated in federal penitentiaries for doing a similar act. I wouldn’t expect any of you to understand this since I don’t believe any of you have ever experienced anyone shooting at and trying to kill you just because you were an American.

Keep in mind, we are at war only because the diplomats (you and your kind) have failed in their mission to prevent war from occurring, and not the young warriors sent to fix the mistakes made in diplomacy. And I need not to remind you that these warriors and their families pay the price in blood, minds, limbs, and THEIR lives—and NOT the politicians that caused the conflict in the first place.

In summary, if it sounds like I’m disgruntled with the leadership of this government from both political parties, you are correct-I am! I would suggest you all work to get this “Ship of State” righted and back on course. Failure to do so will obviously put all your jobs in jeopardy like millions of other Americans now searching for new employment. The choice is yours. Good Luck!!!

John A. Alstad
Posted by TartanMarine at 6:00 PM